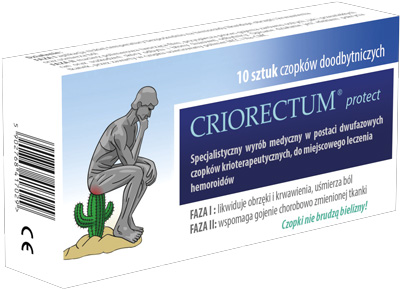 Criorectum protect is a unique dual-phase cryotherapeutic suppository, used for topical treatment of hemorrhoids, at any stage of disease as well as in rectal mucosa lesions. The filler commonly used in suppositories, which has no therapeutic role, has been replaced in Criorectum protect with a mixture of water and polymers. After freezing, we get a convenient suppository form that can be easily applied. Initially, the suppository casts a low temperature on the tissue relieving pain, eliminating bleeding and swelling. When the suppository dissolves, the polymer matrix forms a film that acts as a barrier to microorganisms that slowdown wound healing.

VIVAPUR MCG 811 P used in Criorectum protect suppositories has no pharmacological, immunological or metabolic effects on the human body. It is not absorbed and is fully inert, so the suppositories can be used by allergy sufferers and pregnant women.

Before use, suppositories should be frozen in the freezer of the refrigerator at -10 to -25 degrees Celsius. Freezing time: at least  1 hour. Apply rectally, immediately after removing from freezer. 1 suppository 2 times a day.

CAUTION!!! The suppositories should be shaken before freezing to liquefy the polymer mass and then frozen in an upright position with the sharp end of the suppository facing down.

Precautions for use: If there is no improvement after 3 weeks of use, consult your doctor.

Side effects: immediately after application, a slight feeling of discomfort may occur, associated with a cold sensation. The sensation passes after several seconds.

CRIORECTUM protect - everything you need to know

Criorectum protect is an EC-certified medical device and is registered with the Office for Registration of Medical Devices. 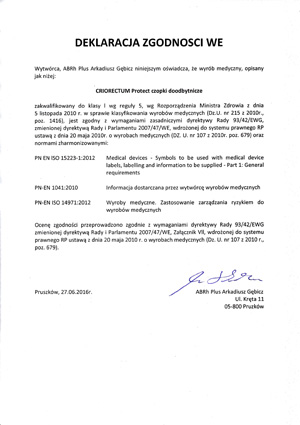 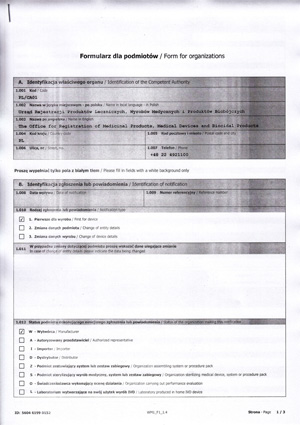 1. WHEN TO USE CRIORECTUM protect?

2. HOW FREQUENTLY AND FOR HOW LONG TO USE CRIORECTUM PROTECT SUPPOSITORIES?

If you are experiencing intense symptoms, Criorectum protect should be used twice daily for 5 days. Persistent or recurrent symptoms are an indication for extending the treatment for another 5 days.

3. HOW TO STORE CRIORECTUM protect?

4. WHAT IS THE COMPOSITION of CRIORECTUM protect?

Criorectum protect consists of water and the polymer VIVAPUR MCG 811 P . The polymer used in the suppositories has no pharmacological, immunological or metabolic effects on the human body. It does not absorb and is fully inert.

5. DOES IT HURT TO APPLY CRIFORCTUM PROTECT SUPPOSITORIES?

Immediately after application of the suppository, there may be a slight discomfort associated with a cold sensation. The sensation passes after several seconds.

6. CAN CRIORECTUM protect BE USED IN THE TREATMENT OF HEMOROIDS AT ANY STAGE?

Yes, you can treat hemorrhoids of any degree with CRIORECTUM protect suppositories.