Cryotherapy treatments, although known for a long time, have been described relatively recently, thus allowing a deeper understanding of the topic of low temperature treatment.

No special patient preparation is required. The freezing procedure can be performed on patients of any age. The method involves the destruction of tissue in a bloodless manner, without the need for its excision (we do not disturb the continuity of the skin), thus avoiding the inconveniences associated with traditional surgery. It involves freezing the base of nodules to induce local necrosis. The procedure is often performed as a part of same-day surgery, in an outpatient setting using high-quality cryotherapy applicators (temperatures below -100°C). The cost of such a procedure is about 2000 PLN. Due to severe complications after the procedure, this method is used increasingly rarely. 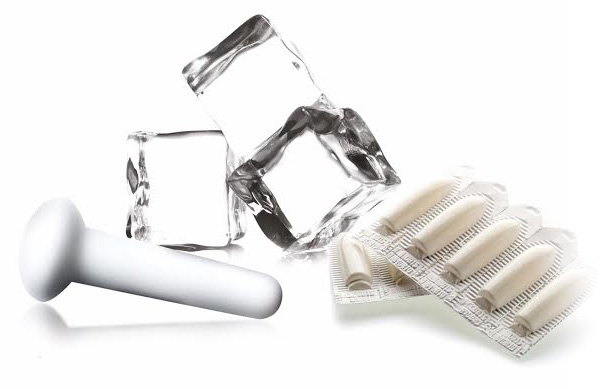 CRIORECTUM is a reusable anatomical stick. It is made of high-grade, special plastic, shaped like a cylindrical tube and the size of a hand pinky. The stick is filled with a specially composed substance that has the ability to transmit "cold", which in addition can be subjected to repeated freezing and thawing. The substance was sealed in the cylinder of the stick, thus preventing it from making direct contact with the body. The function of the substance is only to transfer "cold" to a well-defined place for a precisely defined time. Before each use, the stick must be cooled (for at least 2 hours) in the freezer of the refrigerator. Each application should take at least 8 min and no longer than 10 min. The low temperature obtained at home, is safe for the body and does not cause any complications. The stick is designed to be reusable and does not generate any additional costs.

CRIORECTUM protect are dual-phase rectal suppositories, with their action combining the healing effect of low temperature with polymer technology, accelerating the healing process of both acute and chronic anal area wounds. The filler commonly used in suppositories, which has no therapeutic role, has been replaced in Criorectum protect with a mixture of water and polymers. After freezing, we get a convenient suppository form that can be easily applied. Initially, the suppository casts a low temperature on the tissue relieving pain, eliminating bleeding and swelling. When the suppository dissolves, the polymer matrix forms a film that acts as a barrier to microorganisms that slowdown wound healing.

Cryotherapy (gr. krýos – cold + gr. therapeía – treatment) – in medicine, it is a form of cold therapy using temperatures below 0°C. Contrary to appearances, the phenomenon of the beneficial influence of low temperatures on the healing process has been known for a very long time. It was known and very commonly used in ancient Egypt around 2500 BC. In the 5th century BC, Hippocrates recommended hypothermia (cooling the body) to reduce swelling, bleeding, and pain.

During a  cryotherapy treatment (general cryotherapy), also called cryostimulation, the body's defensive response to cold (temperatures below -100°C) is induced. It results in strong congestion and warming of the tissues, as well as increased production of endorphins, which have analgesic and antidepressant effects. Visits to the cryotherapy chamber are therefore recommended in order to support the basic treatment of diseases and dysfunctions of the musculoskeletal system, e.g. in the case of severe rheumatic pains, in order to increase immunity, increase muscle strength, as well as for quick and effective regeneration of the body after strenuous exercise. Cryostimulation has been used in orthopedics, neurology, dermatology, and sports medicine, among others.

Another method of cryotherapy is to destroy diseased tissue by freezing it. It is then called local cryotherapy. During the procedure, a specific lesion is subjected to low temperature for a period of several to tens of seconds, which causes the destruction of disease-affected tissues. Delivering very low temperature, using a special applicator, leads to freezing of cell contents, rupture of biological membranes and consequently tissue destruction. The cyclic freezing and thawing procedures are repeated several times. They are generally painless, and sensations during local cryotherapy are reduced to a slight burning and itching.

When treating the hemorrhoidal disease, the principle should always be to match the treatment method and timing to the patient's individual condition.